The invasion began on the morning of 24 February, when Putin announced a “special military operation” for the “demilitarisation and denazification” of Ukraine, reinforcing his false narrative associating Ukraine with Nazism. Minutes later, missiles and airstrikes hit across Ukraine, including the capital Kyiv, followed by a large ground invasion from multiple directions.

The Banner says it all Accept Refugees

Russia’s advance towards Kyiv stalled in March, with Russian troops retreating from the northern front by April. On the southern and south-eastern fronts, Russia captured Kherson in March and then Mariupol in May after a siege. 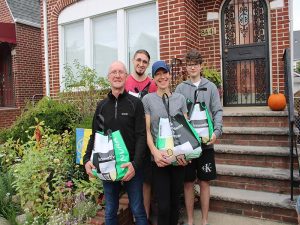 The Banner says it all Accept Refugees

On 19 April, Russia launched a renewed attack on the Donbas region, with Luhansk Oblast fully captured by 3 July. Russian forces continued to bomb both military and civilian targets far from the frontline. Ukrainian forces launched counteroffensives in the south in August, and in the northeast in September.

The invasion has received widespread international condemnation. The United Nations General Assembly passed a resolution condemning the invasion and demanding a full withdrawal of Russian forces. 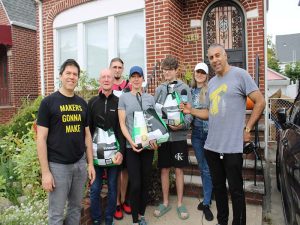 The International Court of Justice ordered Russia to suspend military operations and the Council of Europe expelled Russia. Many countries imposed sanctions on Russia, as well as on Belarus (which supports the invasion), which have affected the economies of Russia and the world, and provided humanitarian and military aid to Ukraine.

Protests occurred around the world; those in Russia were met with mass arrests and increased media censorship, including a ban on the words “war” and “invasion”. Nearly 1,000 companies have pulled out of Russia and Belarus in response to the invasion. 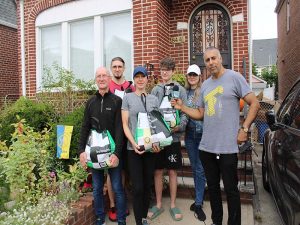 The International Criminal Court has opened an investigation into crimes against humanity in Ukraine since 2013, including war crimes in the 2022 invasion.

The Center for Disaster Philanthropy’s (CDP) response to this crisis is focused on humanitarian needs that arise, particularly among internally displaced peoples (IDPs) and refugees. We are not looking at the conflict itself except for how it affects population movement and humanitarian needs. To that end, this profile is not providing detailed updates about the status of the war as we believe that is better done by news media.

In their Aug. 24 Situation Report, the United Nations Office for the Coordination of Humanitarian Affairs (UNOCHA) said, “Today, nearly 18 million people – 40 per cent of the country’s population – need humanitarian assistance and the situation is expected to deteriorate further in the winter months.” 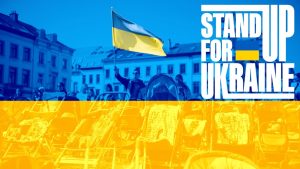 Stand up for UKRAINE

Where are refugees going? The UN says that, as of 4 July, more than 5.2 million refugees from Ukraine have been recorded across Europe. More than 3.5 million have applied for temporary residence in another country:

Others have moved on to other countries, especially those who crossed into Poland, Hungary and Slovakia. These nations have open borders with other EU states. 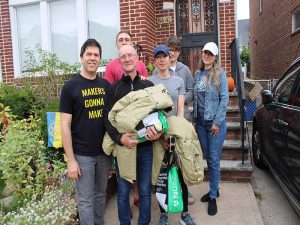 IT is very sad, that you have to leave your country and leave everything behind just take your suitcase and move to another country as a refugee, where you don’t know anyone, don’t speak the language, don’t know the culture and everything is fully confusing.

Approximately, one month ago, Roman Liuzan , Liuba Liuzan, Yurii Luizan  and Dmytro Savka, a family left Kiev, and went to Poland refugee camp and from there they went to Ireland and then after that came to New York USA. 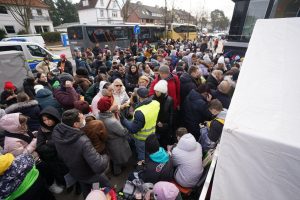 Ukraine Refugee’s fleeing to all over the World

They left all of their properties, business and everything else, which they worked very hard all their lives.

Each one of them came, with a suitcase each, with literally nothing. Mr. Roman went on to say, it was very scary in Ukraine, and he and his family were lucky to leave as refugee’s or they also could have been killed in the war.

Daniel Shapiro and his Fiancé, have opened up their door to the four refugee’s, Mr. Shapiro went on to say, I am taking money out of my pocket, to feed each one them three times a day, take them around New York city to get them familiar with New York city. So hopefully things get better so the Government can help them, with different services.

Brand new Winter jackets with hoodies were given to each one of the refugees for them to wear during the winter to keep them warm. We at Humanitarians of the World Inc, (HOTWINC), have pledged to help feed the refugees, until they get government services, housing, food and other basic necessities, so they can stand on their feet.

Each and every one were very thankful to us with us giving them the above items to help them to ease the pressure of them.

We at Humanitarians of the World inc, (HOTWINC) www.hotwinc.org  have helped thousands of people, in USA, Europe, Asia, Caribbean Countries and South America.

We are asking for donations of money at this time, in whatever amount you can donate, it will help us to continue our humanitarian work and help the above refuges and many more who need our help.

I also like to thank Urgen Sherpa, former president of the Sherpa Association, for kindly donating brand new winter jackets, to Humanitarians of the World Inc. The above refugees thank you very much for your kind donation and they will think of you when they wear the jackets during the winter to keep them warm. Great act of humanity on your side, Myself and all our Humanitarians, salute you for your kindness. We also like to thank many organizations and individuals, you know who you are, who have donated Money, Food, Basic necessities, toys and much more.